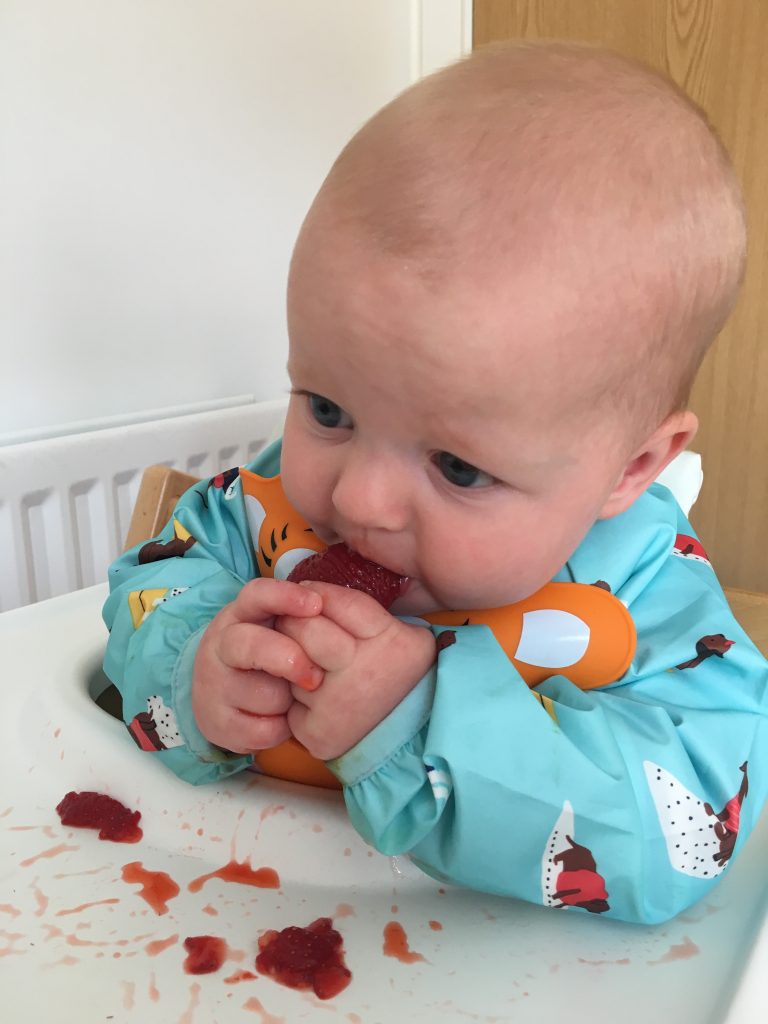 A couple of days before Oliver turned 6 months we started to wean him.  NHS guidance is to start weaning around 6 months, as waiting this long gives the digestive system time to develop fully in preparation for food, adding to this having breast milk alone for 6 months protects your baby against infections.  They advise that you start weaning when your baby shows signs of readiness: being able to sit up, coordinating their hands, eyes and mouth and finally being able to swallow food.  Oliver had been able to do the first two for a couple of weeks, so the next step was to test him with food!

Baby led weaning involves giving your baby food as you or I would eat it, no blending, mushing or making it easier to swallow.  When I was weaned the guidelines were 3 months, and obviously giving a baby of that age a chunk of food would never have worked, they would probably have looked at you like you had gone mad!  We chose to do baby led weaning, as nowadays babies wait longer to start eating, meaning there isn’t really the need for purees.  I think most people use purees nowadays because they are afraid that their baby will choke on a piece of food, not because their babies actually need their food pureed (unless they have been advised to wean early on medical grounds).  Oliver has no teeth yet, but he happily bites chunks off with his gums and loves picking the food up and squishing it in his hands.  Baby led weaning is more of an exploration journey, they learn the textures and tastes of foods, rather than everything being blended to the same consistency and having multiple flavours in one.  Babies don’t actually ‘need’ food until they are 1, so why not give them those 6 months to explore all the tastes and textures of different foods!

Oliver frequently gags on his food, he’s slowly learning to swallow the lumps, but he usually ends up with such great chunks of food in his mouth, there’s no wonder he gags!  He has tried lots of different foods, but his favourites so far have been; cucumber, avocado, strawberry, raspberry, apricot, banana and peppers.  It’s so funny watching him trying to grip the slippery foods, he chases them around the highchair tray until he can pick them up.  We have been using the Gill Rapley Baby Led Weaning cookbook for meals, and it has some great recipes in it, they all have tasted great, and we have all enjoyed them as a family.  Oliver really loves water too.  We bought him a Munchkin 360 cup originally but he just chewed the edge so I think we will try him in a month or so again with that, so we are currently using the Tommee Tippee first cup.  He can hold on to the handles, but unless it is filled to the brim he doesn’t get much out himself, so we do give him a hand with drinking, to help teach him that he needs to tip his head back.

We have the Stokke Tripp Trapp highchair, which we bought from one of my mums colleagues, we absolutely love it and I would definitely recommend it to anyone looking for a highchair!  My sister made a cover for it out of oil cloth, so the cover wipes down really easily as well as the rest of the chair.  It’s a good highchair for baby led weaning because you can push it right up to the table if you want to, we currently use the tray attachment, as our table has crevices around the edge of it, which would inevitably end up filled with food!

I would highly recommend baby led weaning to anyone starting their weaning journey, it’s great fun and there’s no need to be scared.  Of course it is messy, lots of food ends up on the floor and on their clothes (even when you try and cover them up) but it is all in good fun.  If Oliver doesn’t want it in his mouth he just blows raspberries or sticks his tongue out until the food makes its own way out!

Has anyone else had any good experiences with BLW? 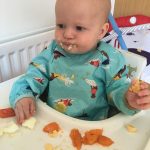 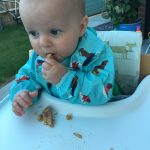 Risotto, he loved sucking on the chicken! 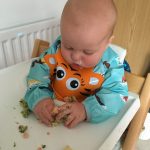 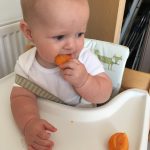