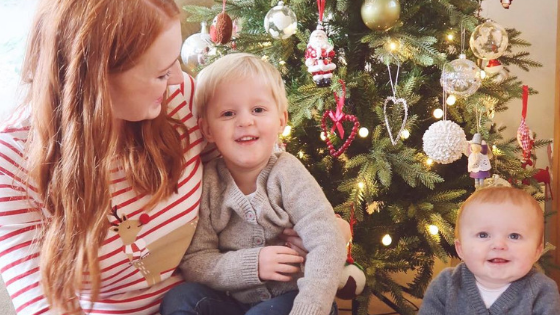 Growing up, I have always been so close to my little sister and I’m sure it’s down to our close age gap. We have 2 years 1 month between us, so I don’t remember life without my sister. We’ve grown up together, spent our childhood playing together and we’re still super close as adults. So I always knew that I wanted this closeness for my children.

When it came down to planning our second pregnancy, I knew I wanted quite a small age gap. If I’d had it how I wanted it would have been just under 2 years. However, due to my husband starting a new job and their paternity leave policy we decided to be sensible, wait a little longer than planned so that he could receive full pay for the 2 weeks he would be off work.

We are very fortunate that I fell pregnant very easily, so the age gap was exactly as we planned. 2 years and 3 months. Oliver was still too young to fully understand what was happening, as much as we told him mummy was having a baby and there was a baby in my tummy, he didn’t really have a clue what that involved. When Henry arrived he coped incredibly well. Much better than we could ever have imagined. Yes, he asked us to put Henry down many times so we could play with him. But he seem to be quite understanding if I said I was feeding Henry or I couldn’t put him down for one reason or another.

Over the past 8 months, yes we’ve had days where I’ve thought, why on earth did I do this. But on the most part I’ve loved it. Oliver can’t remember life without Henry, sometimes he might get jealous of Henry being held by someone and he might be a bit rough with him. But on the most part he’s incredibly loving towards him. Henry’s the first person he wants to see in the morning. He comes in our room and once Henry’s awake he climbs in his bed lies down next to him and gives him cuddles and kisses. It makes my heart feel so full.

Henry has loved Oliver from day one. Yes, sometimes he cries when Oliver’s a bit rough with him, when he takes the games a bit far. But through the tears he’s then laughing at Oliver’s next move. He smiles as soon as he sees him come in the room. He’s constantly trying to play with him (which Oliver does find annoying, especially with the train track, my husband calls Henry Godzilla!) and I can just see them in a years time playing happily together.

Yes it can be hard work. I constantly have people commenting that I’ve got my hands full. I’m always on the go, they both keep me on my toes. But you know what, I love it. I love the madness that comes with a close age gap, because I know that madness will pay off once the boys are a little older. Hopefully at some point they’ll be enjoying the same toys at the same time (I can at least hope). They will be able to turn to each other and hopefully have a close bond when they’re older. And when we get to that point, it’ll all be worth it.

What was your children’s age gap? Would you have it any other way?