Every month I write these updates, I can’t quite believe it.  The time really flies by with a second baby.  Henry is such a chilled out baby and sometimes I feel the mum guilt that I can’t give him all my attention all of the time like his brother got.

Size wise, Henry is on the 98th centile for his weight, last weighing in at 18lbs 13oz at 15 weeks.  Although I got on the scales with him and according to them he’s now tipping the scales at 20lbs!!  We had him measured and he’s now on the 91st gentile for his length.  He’s going to be a lot bigger than his big brother who’s always been on the 50th! 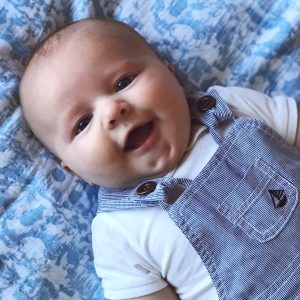 Henry’s now starting to do a bit more, he loves lying on his tummy.  If he’s grouchy, I lie him down on his tummy and he loves watching his big brother play or whatever we’re doing!  He can wiggle around on his tummy and back a little and last week he finally rolled!  From his back to his front, and then a few days later from his front to his back.  He doesn’t often roll still and sometimes I see him trying so hard to get himself over.

Henry has pretty good head control and is constantly thrusting himself forward when he’s sat on your lap.  He loves being really upright, so I have caved and got the Bumbo down for the loft and he LOVES it.  He sits there laughing and smiling because all he wants to do is see exactly what is going on. 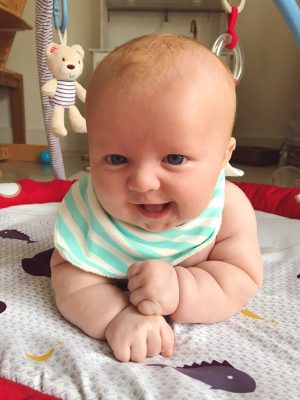 Oliver was never a dribbler, but oh my word, his baby brother is making up for it.  Gallons of drool pour out of his little mouth every day.  We’re going through dribble bibs like they’re going out of fashion.  I can’t see or feel any teeth coming through yet, but there’s just so much dribble!  He love chewing on things, his hand, his Matchstick Money, his comforters, anything!

Henry’s still breastfed, and still feeds like a pro.  We went out for the evening this month and he happily took expressed milk from a bottle which is perfect as it was something his big brother never did.  I’m struggling to get into an expressing routine, which I need to do.  We have a wedding in December where we are going to have to leave him for the day (something I’m very anxious to do as I didn’t leave Oliver until he was 1) so I need to get a good supply ready for him, as I literally have no idea how much milk he will need! 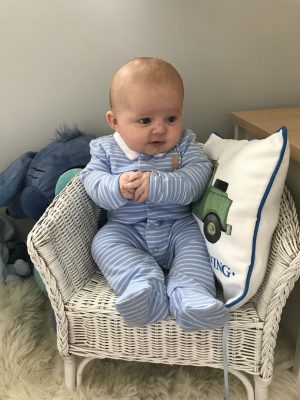 We still haven’t had that elusive night of full sleep.  I swear he’s just worried his immense weight gain will drop off if he drops his middle of the night feed!  He wakes any time between 2-5.30, he used to always wake at a similar time but now it seems to be completely random.  He’s also started waking up one more time in the night but seems to settle back to sleep straight away when I give him his dummy and switch Ewan the Dream Sheep on.

He’s still in the bedside crib and using the Sleepyhead.  I don’t know if he’s going to fit in it much longer as I have read that it’s designed for 0-8 months or up to 22lbs.  And he’s currently pretty snug in it.  So I may have to retire it soon sadly!  I would get the Sleepyhead Grand but they won’t fit in the crib! We’re planning on keeping him in our room until he’s at least 6 months (I follow the safe sleep guidelines to a tee because I would rather be safe and overcautious!).  Oliver was 8 months when we moved him and I felt that was a good time for us.  Plus the boys will be sharing a room and I’m terrified Oliver will try and get him out the cot in the middle of the night!

Finally, the big event this month was his Christening! On the 19th August Henry was baptised, we had a lovely party in the garden afterwards, the sun shone and it was the perfect day.  Plus it’s the only day you can put your baby boy in a dress and get away with it!  Henry now officially has 3 wonderful godparents keeping a close eye on him and has been welcomed into our church. 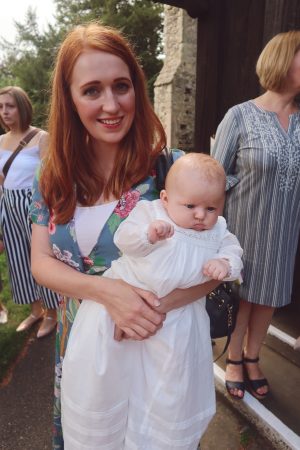