This is a post I’ve been asked to write about by quite a few readers.  It’s taken me almost a year to actually get round to writing!  Last year we changed Oliver’s cot to a cot bed, he was about 18 months old at the time.  It was quite young, I know, but he really hated the cot sides.  He screamed every time we left him in the cot.  So for our own sanity we decided we would just change it over.

We started the process by changing his sleeping bags to a duvet.  He already was using a pillow at this point.  He loved the freedom of the duvet, as he kept getting all tangled up in his sleeping bag.  After a few weeks of getting him used to using the duvet we decided to just go for it and remove the sides.

We went full on cold turkey, removing both sides and changing the end of the bed as well.  I just decided it would be easier to just do it all in one hit rather than taking one side off and leaving it a while then removing the other side. 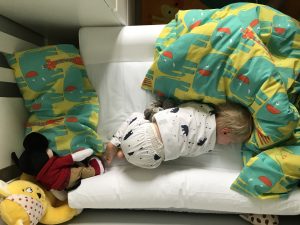 When we were deciding what we would use, we thought a bed guard was too much like the side of the cot.  So using something that didn’t look like a cot side but still kept him in the bed was a must.  We ended up buying the Hippychick Dream Tubes.  They’re two inflatable tubes that come with a specially designed sheet which you insert the tubes into.  The Dream Tubes worked perfectly to keep Oliver from falling out of bed.  He could still easily climb in and out of bed over them, or crawl to the end of the bed and slip out the gap between them and the bed end.

We used the Dream Tubes for around 3 months and then we took them away completely.  To this day I can count the amount of times he’s fallen out of bed on one hand.  He has a tendency to sleep with his legs hanging off the edge of the bed though!

Oliver adapted to sleeping in a cot bed very quickly and easily.  I don’t know whether it was because he hated the cot so much or whether he was just so young that he couldn’t remember life in a cot.  But I’m glad we changed his bed when we did.  Although he has had free access to walk into our room in the night for over a year now…!  If he wakes in the night he just walks across the landing, climbs in our bed and goes back to sleep without waking us up!

Have you changed from a cot to cot bed, how was the process for you?