I finally got around to getting some photos of Oliver printed off last week, and it has made me realise how much our little boy has grown and changed in the past few months.  He is really starting to get his own little personality, I think he’s going to be a lot like his daddy, he loves being the centre of attention and gets grumpy if things aren’t going how he would like them to!!  He loves staying close to you, he doesn’t really like being put down and is forever on the move.  When he naps in my arms he always grabs onto my top, as if to say ‘you aren’t going to be putting me down whilst I snooze!’  He’s a right little nosey parker, the past few times we have been out shopping he has started crying in the pram and nothing will make him stop until I pick him up and then have to carry him around in one arm and try and steer the pram single handedly.  He loves looking around and watches everything and tries to grab anything close by. 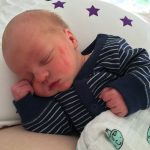 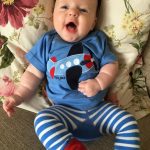 Looking at all the photos, I can’t believe how much hair he had as a newborn.  He had a full head, and now he’s a little baldy with a ‘light dusting’ of hair with just a few strands of his baby hair left.  There’s still much debate as to what colour hair he’s going to have.  I think it’s going to be a golden blonde, as when the light catches the top of his head it looks golden, but not quite ginger like me!

Oliver has recently found his feet, so his current favourite thing to do is to lie down and show us how agile he is pulling his feet right up and grabbing his toes!  It’s handy for nappy changes but not so great when you’re trying to strap him in his car seat!!  His go to method to wake me up in the night is now the ‘leg slam’ where he balls his legs up and then slams them down on his crib, multiple times until it wakes me up.  He loves being tickled and us saying to him ‘What are you doing?!’ which always guarantees a smile and a little giggle!   He’s definitely going to be a cheeky little monkey when he gets older!

I can’t wait to see how his personality develops further once he starts to be able to do things himself, but I wish he would stay this little a while longer!