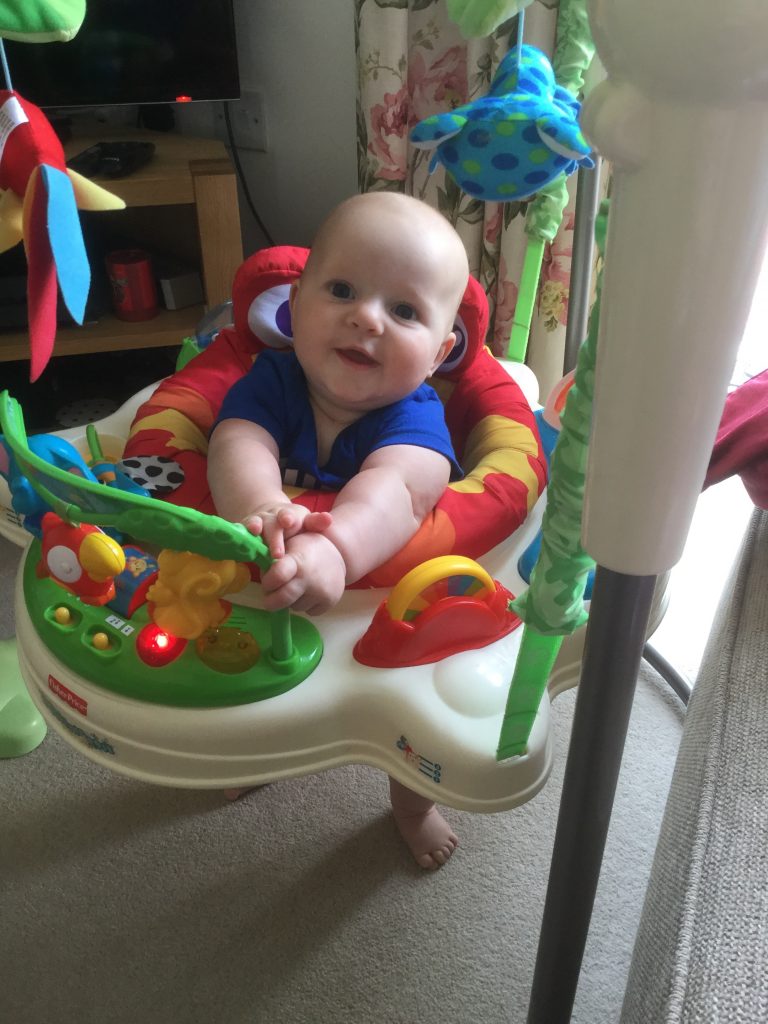 Well, 20 weeks, he isn’t the full 5 months until next week! I can’t believe how fast the time has gone, my tiny baby is no more, I now have a proper little baby boy, who likes to touch everything and is so interested in the world.  This past month he has taken some big steps.  Firstly, he has finally mastered the roll, he has been able to roll from lying on his tummy to his back for a long time now, but going back the other way he couldn’t quite master.  A couple of weeks ago, he suddenly started really thrusting himself on his side, in an attempt to get over, he slowly started working out what he needed to do to roll, firstly he worked out how to get his head in a position he wouldn’t suffocate himself with, then he worked, out how to get his little legs over, and lastly he worked out how to get his little arms over.  The first couple of times he managed to get over, he got his arms stuck underneath and he was groaning with effort to get them out, so much so he managed to flip back over, then one night before bed, he finally got them out from under him and performed the full roll! Stu was looking after him whilst I was in the bathroom, he quickly called me through to see Oliver happily lying on his tummy looking proud as punch.  Now every time he has managed to roll over I have missed it!  He did it the next day when his auntie was over and lots of other times with daddy, but whenever he’s with me he just stays put!

This month has also seen Oliver moving from his crib to his cotbed.  I kept him in the crib for as long as possible, but since learning to roll he took a preference to sleeping on his side, which in a narrow crib wasn’t really possible.  It meant both he and I were awoken multiple times during the night with him rolling into the side and making a lot of noise when he kicked his legs out and swung his arms around.  He’s still in with us (as its recommended to sleep in the same room until baby is at least 6 months to reduce the risk of SIDS) so we just had to re-jig our bedroom furniture slightly to accommodate the cot.  I prefer to have him right next to me as I like to be able to see/hear him at night, so he sleeps on my side of the bed, and our bed has been shifted over and Stu has a gangway on his side to get out of bed now, which he isn’t too happy about (he’s worried he’s going to have to get up quickly one morning and wack his head on the wall!!).  Oliver is LOVING all the space he has in his new cot, he does little rotations in the evening and turns himself around so he’s lying widthways across the cot, then looks at us like “I don’t know how I got here!” We have the Mamas and Papas Harbour cotbed, my Grandpa kindly bought it for us last year before he passed away, so it’s quite a special piece of furniture for me.  I can climb in it at night to feed Oliver, it’s surprisingly roomy and can hold the weight of a fully grown adult!  It’s much easier than lifting him in and out as he’s getting heavy, and it’s a bit of an awkward angle because the cot’s right alongside the bed.

He’s become much more interactive now, Stu says he much prefers it now you can see Oliver’s little personality coming through.  He’s definitely going to be assertive and will know his own mind, he’s already quite strong willed!  He’s definitely going to be a bit of an attention seeker, he loves being watched, and if you aren’t watching him directly he will squawk at you until you do (or if you’re close enough he will poke you in the eyes, nose or mouth or grab you!).  He now reaches out and takes things off of you or if he sees something he wants he tries his hardest to lean over and get it!  Just the other day he was sat in his Bumbo and I had left my tube of Jaffa cakes next to him, he spent a good 5 minutes trying to turn himself around and lean over to grab them!  He’s definitely starting to notice food a lot more now, and I can’t believe it’s only a month until he starts weaning, where the time’s gone I don’t know!  He really recognises people as well now, he gives my mum and sister the biggest smiles when they come to see him, special smiles like he gives mummy and daddy, I guess it’s because he sees them almost every day.  He is such a smiler, today when I popped to the health visitors clinic to get him weighed, he was sitting there smiling at all the staff, babies and mummy’s!  I’m very lucky to have such a happy, content (99% of the time) baby and I count my blessings every day!