Stu and I were very lucky that Oliver loved bath time from day one. For about 10 weeks we only had screams of laughter and happiness when he got in the bath and he just loved splashing his little feet in the water.  He always cried when we got him out, I think he would have happily stayed in there all night!  But then one night Oliver decided bath time was the end of the world. We popped him in his bath seat as usual and he screamed the house down, nothing would calm him at all, not until he got out.  This continued for another 2 weeks, we tried everything, toys, having a bath with him, distraction techniques, without the bath support, music, nothing would work.  We ended up popping him in the bath, washing him as quickly as possible whilst he went into a complete meltdown and whipping him out, wrapped him up in his towel and cuddled him until he stopped crying.  Bath time had become a stressful time for us and Oliver.

The other night I decided we would take it slow.  I undressed him on the changing table as usual and let him have a bit of nappy free time, which he always loves.  When the bath was run I carried him through to the bathroom, he started to wimper so I moved in front of the mirror so he could see us, which never fails to make him smile (he always laughs at himself in the mirror).  I then knelt down by the side of the bath, still holding him and he had a look in the bath.  He wimpered again slightly but when I pulled the cord on his musical donkey and the music started to play he quickly stopped.  We then proceeded to dipping his toes in the water and I managed to get him into his bath seat with minimal tears.  I kept playing what I now call ‘the magical donkey’ and spoke to him softly. Donkey decided to sit on Oliver, which he found funny and gave us the first bath time smile we had had in weeks!  He did really well and the only bit of the bath that actually made him cry was when we had to turn him over to wash his back and bottom.  Now every bath since he hasn’t cried, so fingers crossed he has been cured of his bath aversion!  He now lies in his seat with his feet up though, so our next challenge is to get him splashing his little feet again! 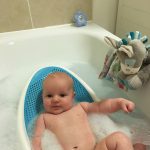 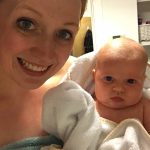 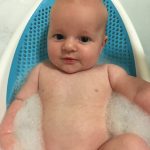