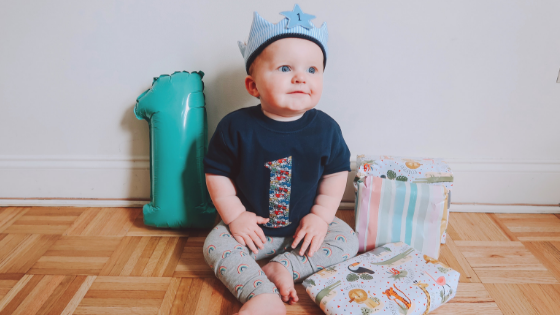 A year has flown by, my little baby is now almost a fully fledged toddler. I know I’m late writing this, you’re actually almost 14 months now, but I wanted to document you being one on here!

You’ve turned from a baby into a little person in what feels like overnight. Where did that year go? You were very prompt and arrived on your due date, less than 4% of babies do that! I had hoped you would stay in until then as I had plans the day before you arrived, and also didn’t want your arriving the day after your due date as that’s your uncle’s birthday and he didn’t fancy sharing!

Breastfeeding the second time around has been so easy, you were a natural feeder, no problems latching on, you loved your milk. In fact you still love your milk, as I’m still feeding you now at almost 14 months. I intended on stopping when I went back to work but you have other ideas! The problem I’m finding is you ditched your dummy when you were about 6 months old and now your comfort is me, so trying to work out how to give you something else that you will find comfort in..! Any ideas are always welcome!

You took your first steps on your first birthday, whilst we were on holiday in New York city, neither me or your daddy witnessed it as I was in the loo and your daddy was taking Oliver to the loo! But you wouldn’t take any more than one or two steps until just a few weeks back when you decided you could walk! We’ve bought you your first shoes as you just want to walk everywhere now!

You’re such an easy chilled out baby. I thought Oliver was fairly easy, but you’ve surpassed him! You’ll go to anyone and go along with whatever we’re doing. I guess that’s part of being a second child! But you do have a feisty streak in you and more and more now you’re letting us know how you feel about things!

Food wise, you are the king of eating, I don’t think there’s anything you won’t eat. You try everything, aren’t bothered by spice, and seem to find real joy in food! After having your brother who only eats to survive, it’s nice to have a food lover like me!

Oliver and you have such a lovely bond. Yes you cry if he tries to cuddle you (because Oliver’s idea of a cuddle is a head lock) but you are constantly following him around, trying to play with him and chatting to him. I can see you’re getting closer to each other and give it a year and you’ll be thick as thieves! Oliver has even started sharing his toys with you now so he must like you!

Your speech is amazing and hearing you starting to form words (mummy, daddy, cat, did it, that, bird) makes me realise how little your brother really said at your age. You’re definitely going to be the chatterbox out of the pair of you!

It’s such a pleasure being your mummy (even if at 14 months in you still wake once almost every night, I would love a continuous run of full nights sleep at some point) you really are the sweetest, most charming little boy, but please just slow down! I’m not ready for you to be a toddler yet!