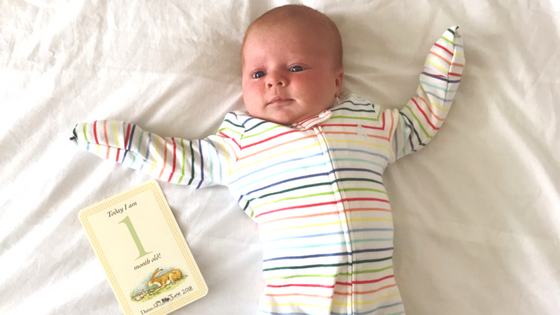 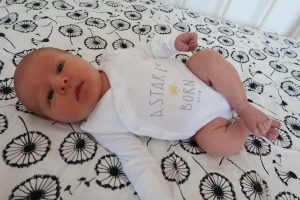 Since Henry was born, he’s piled on the ounces!  At 10 days he lost all of 5g from his birth weight.  I had him weighed today (he’s now 5 weeks) and he’s gone from 9lb 4oz (at 2 weeks old) to a whopping 12lbs 9oz!  He’s got a good strong neck and chubby little arms and legs.

He’s now into 0-3 month clothing and size 2 nappies.  He was out of newborn clothing just before he turned 1 month old, he was just a bit too long and his toes were curling in the feet!  To be honest I could have moved him up a size about a week before but I wanted to get some more wear out of my favourite outfits!

He’s definitely going to be a lot chunkier than his brother was, Oliver was only 10lbs at this age and I don’t think he was as long as Henry. 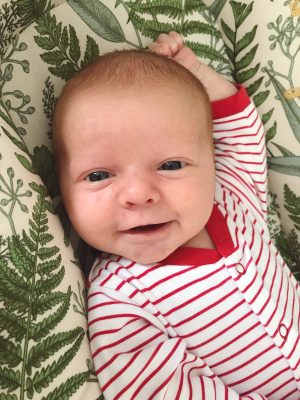 Henry is exclusively breastfed on demand and I’m aiming to do it to a year, as I did with his brother.  He loves his milk and is a real greedy guts!  I think he would feed all day if he could!!  Generally he feeds every 1.5-2 hours during the day and overnight he feeds every 3 hours.  We haven’t had any issues at all so far, so fingers crossed it continues!

Henry is a dreamboat so far, he literally wakes up in the night to have a feed and he goes straight back to sleep.  He feeds for about 10 minutes, I use my meemoobaby meelight and that keeps us both in a sleepy state.  It isn’t very bright so doesn’t wake my brain enough to keep me awake which is great.  He sleeps plenty throughout the day as well, although he has plenty of awake time in the morning.

He’s sleeping in his Tutti Bambini Cozee bedside crib and using a Sleepyhead in there as well.  He settles really well in his Sleepyhead so I’m really pleased we invested in it! 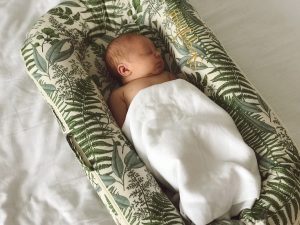 As with Oliver, we have no set routine.  Henry feeds when he wants and sleeps when he wants.  He usually has a bath with his big brother at around 7pm and then he has cuddles until my husband and I go up to bed at around 10pm.  It’s what works for our little family as we generally have very little routine as my husband works shifts.

We’ve also had our first smiles, they’re just the cutest little things!  I forgot how cute those gummy little smiles are!  He’s just such a happy little baby, he rarely ever cries.  The only things he does loudly are his burps and farts (I’ve never heard a newborn fart as loudly as he does!!). 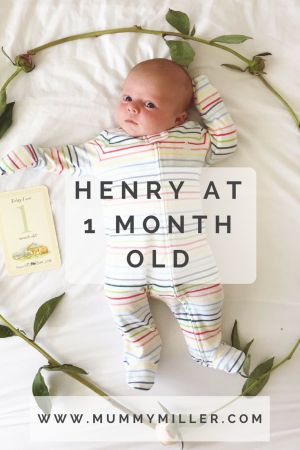 Henry has slotted into our little family so easily and we are all so in love.  Fingers crossed it continues!