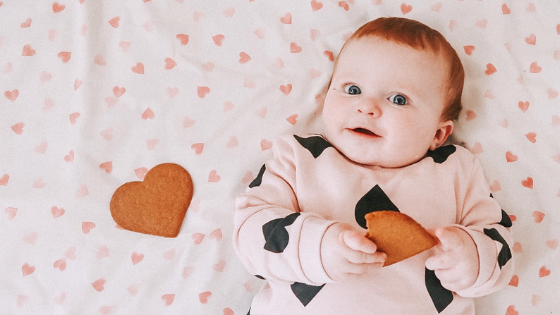 I’m sitting here typing this wondering where on earth the time is going. I now have a crawling, babbling little baby rather than the squishy newborn I brought home!

Still exclusively breastfed, although now he’s got teeth it’s a little more uncomfortable. He rarely bites, usually only if he’s really suffering with teething, but I can sometimes feel the sharpness of his teeth! He feeds anywhere between 3 and 6 times a day now (dependent on whether he’s under the weather or not) if he eats well at breakfast/lunch then he will usually only have a mid-morning and after lunch feed, occasionally a late afternoon one too! Henry still wakes anywhere between 1-3 times a night but it seems to on the most part just be once a night.

He’s a real foodie and there’s very little he won’t eat. He loves satsumas, blueberries, broccoli and carrots. As well as Kiddylicious wafers and their biscotti too!

Henry crawls everywhere and anywhere now. He’s pretty quick when he wants to be as well! He’s also now begun pulling himself up on furniture, and loves standing up in his cot. His favourite thing to do is pull the stair-gates closed and just stand himself up at them and watch us on the other side! He’s able to walk across the room with his walker now, which is just mad to me! Oliver didn’t do that until he was much older so I’m thinking Henry’s going to be walking a little sooner than his brother!

Henry may have the chunkiest little thighs and most scrumptious rolls but I think his weight is balancing out. With all the moving about, he seems to be attempting to get rid of the rolls! He’s wearing a mix of 9-12 and 12-18 month clothing, still in size 5/5+ nappies and we still struggle with all-in-one outfits and poppers bursting open!

He’s still the happiest of babies, the only times he cries is when his big brother is a bit over-zealous with his affection or he has his toys pinched off of him. But his big brother is still his absolute idol and he can always make Henry laugh!