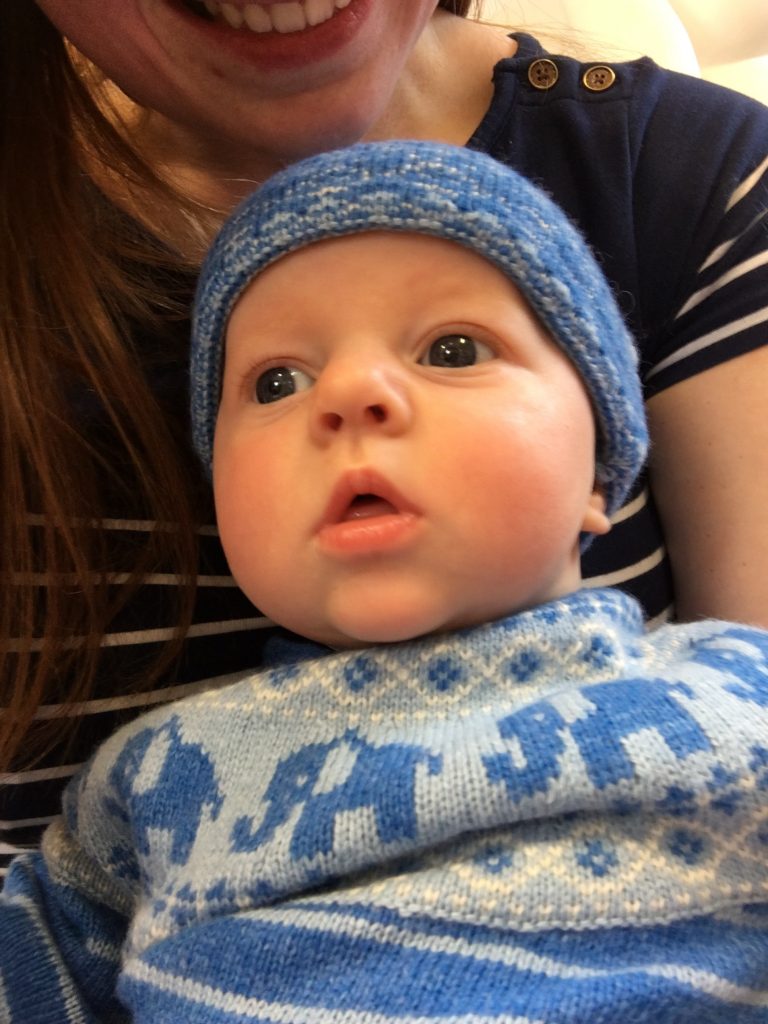 Back in April we were asked to head up to the JoJo Maman Bebe HQ in London to take part in their Autumn/Winter catalogue shoot. When Oliver was about 5/6 weeks old I had been sat internet hopping on a Friday afternoon whilst I fed Oliver and when looking on JoJo’s site I discovered that you could apply to become a JoJo baby.  I submitted Oliver’s photos thinking he would never get chosen, but lo and behold on Monday morning I had an email back asking for Oliver to come up to the shoot in a few weeks time!

All ready to go in the car

It was a Monday morning and we had to be in Battersea at 9.30am, which is about an hours drive from us.  We set off at about 7.15am because I thought that Monday morning traffic going into London would be a nightmare. Oliver wasn’t too thrilled with the early wake up call!  I had considered getting the train, but taking a 2 month old baby on a commuter train wouldn’t have been worth the hassle! We arrived at the offices at about 9am and were warmly welcomed by the girls who were in charge of organising the shoot.  It was great fun and Oliver was asked to try about 5 different outfits on to be shot. He looked so adorable and I just sat there thinking ‘I will need to buy these all!’. There were two other babies who came at the same time as us, they looked so cute in their little outfits too, I think if money wasn’t object I would be purchasing every sleepsuit I saw that day!

Oliver was so well behaved, after he had modelled a couple of outfits he started getting a bit grouchy, so I managed to get him to sleep. He was already dressed in one of the outfits when he fell asleep, and by some miracle I managed to lay him down on their bed and he didn’t stir, so they managed to get some snaps of him asleep. He looked so cute and they even used the photo on their website!

I’m not planning on entering Oliver into the professional baby modelling world, but this was a lovely thing to do as a one off.  We got sent all the photos from the shoot and a voucher as a payment for our time, which was very kind of them.  I’m very proud every time I go on their site and see his little face and it is lovely to have some professional photos of Oliver.  He was so worn out after sleeping all the way home Oliver fell asleep during a nappy change!

You can find Oliver at: