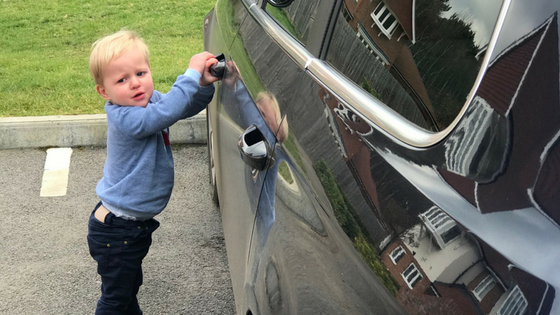 Every parent knows that at some point, their lovely little toddler will hit the point when they will push their boundaries.  The terrible two’s is something you quietly dread.  Oliver hit this point at around 18 months, and slowly and surely he’s tested the boundaries we have put in place.   Recently he’s ramped it up a gear and has thrown huge tantrums, starting physically hitting out and just shouted no at everything he doesn’t want to do.

Throughout the past 6 months I have learnt what does and doesn’t work.  I know that his strops, tantrums and sometimes aggressive behaviour are all a way of him processing what he doesn’t understand.  He’s not being ‘naughty’ he’s learning boundaries and what behaviours are and aren’t acceptable.  I can tell that 99% of the time it is due to frustration because he can’t get his point across.  Oliver still can’t tell me what he wants, the words he does say are very limited, so it is immensely frustrating for him when he doesn’t understand or can’t tell me what he wants.  So I thought I would share some of my tips and tricks.  Obviously every child is different and all children respond differently to these.

Oliver seems to get more worked up when I just tell him ‘no’.  I have worked out that if I say ‘don’t do that, you’ll break it/you’ll hurt yourself etc. he is a lot more likely to stop whatever he is doing that he shouldn’t.  Quite often if I do end up saying no, I will follow it up with why he shouldn’t do what he is doing.  This has a much better response than if I just say no.

Give them a choice

Oliver hates wearing a hat or his hood up, however when it’s cold, wet or windy, he often needs something to protect his head.  If he throws a strop because he doesn’t want to wear whatever it is I’m trying to get him to, I will give him the option of lets say hood or hat.  He responds a lot better to this.  It doesn’t always work, but it definitely works a lot better than trying to get him to do what he doesn’t want to.

Sometimes they just need a cuddle

More times than not now when Oliver gets himself worked up and lashes out, he usually scares himself.  This usually results in him welling up or starting to cry.  These times I always offer him a cuddle, and he usually goes straight for that option and will sit on my lap cuddling until he calms down.  It can be really scary for them to feel so out of control, so to show them that you are there to help can really reassure them.

Sometimes distraction is the only way to calm Oliver down or stop him from doing something.  I’ve learnt that some behaviours are down to him just being hungry.  If I offer him a snack when he’s doing something he shouldn’t, he will quite often stop it for food.  A bowl of strawberries, raspberries or a bit of cereal resolve most of our problems!  Other times, if he I having a tantrum I will offer him a distraction, like ‘if you stop doing that then we can do some colouring/have a cuddle’ sometimes he goes for it, sometimes he doesn’t but it’s always worth trying!

Children want to please you, and whenever you say well done, you’ve done so well, they respond so much better.  Even if it’s a little win for you, praise it.  Oliver hates getting in the car seat, it almost always results in him screaming eat me.  But 1 time in 10 he will sit nicely and let him strap him in.  Every time he does this I make sure I praise him, sometimes I over praise because I want him to know that that behaviour is what I want.  He is always really pleased when he receives praise from us, and slowly but surely I think it is changing the way he behaves.

What’s worked for your child when they’ve had a tantrum?  I would love to hear!