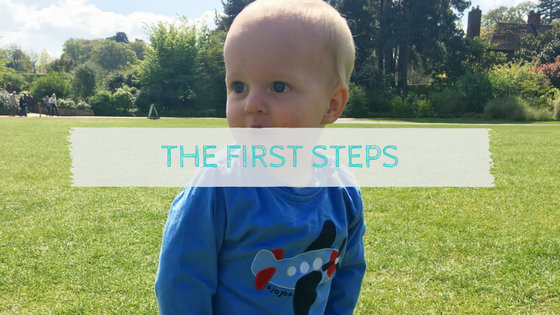 On Easter Saturday (thats a thing, right?) Oliver decided to give us a treat, his first steps.  At 14 months old he’s finally found his feet!  And I mean his proper first steps, not just a shuffle, it was a full on walk across the room.  I have been waiting for this moment for what feels like such a long time.  Oliver started crawling at 6 months old, and cruising furniture at 7 months.  We thought that he would be walking by a year, and when he didn’t we were pretty surprised.

Oliver was clearly just waiting to gain that real steadiness on his feet, he hasn’t really fallen at all since he started walking, which is good for him.  I know it’s early days, but he is pretty steady on his feet.  It’ll be so nice as all his little baby buddies are walking (they are all 2 months older) and he was the only crawler, so he can run along with them now!

Stuart was working, so I had gone to my mums for the day.  When we got there we were sat in my mums room.  Oliver was on the floor with my sister and kept standing up.  My sister put her arms out, and lo and behold, he walked towards her.  He did it again and again.  Each time going a few steps further and within minutes he was almost walking the width of the room!  Luckily I caught it all on camera and sent it over to Stu, he rang me straight away, proud as punch!

He has suddenly decided that walking is the best thing in the world, and he will demonstrate his new moves pretty much all the time and only resorts to crawling when he’s trying to get somewhere really quickly.  His favourite thing in the morning now is me getting him out his sleeping bag, putting him down and walking out of his room!

I’m just so proud of him, however I’m tinged with a little sadness too.  He’s no longer a baby, but a toddler.  He’s only going to get more grown up as the months go by.  I’m going to miss him being little.  And I’m going to miss not having to chase him across the room as well!!  I miss those baby days when you put them down and they stayed there!!